Food not Feed: Are the Ingredients in Pet “Food” Safe? 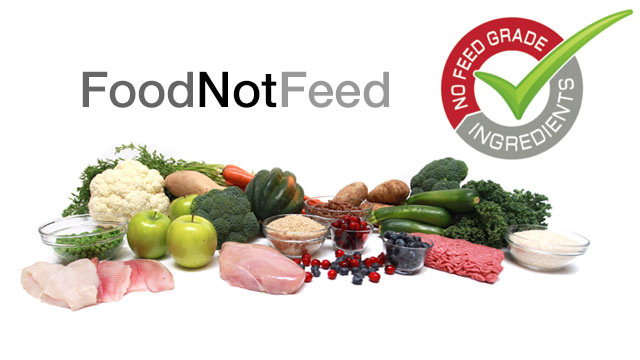 This article offers a carefully researched, evidenced-based rationale for why JustFoodForDogs uses only ingredients certified, inspected, and approved by the USDA/FDA for human consumption in its diets.  It is not a gimmick or clever marketing.  It is simply the best legally defined food quality available in the US.

Despite the long history of kibble and cans made with feed grade ingredients and used as pet “food”, published, scientific evidence strongly suggests feed grade (animal grade) ingredients can be toxic.

In April of 2014, a newspaper in Hong Kong reported that American brands of pet food imported into Hong Kong from the USA were found to contain alarming levels of a carcinogenic toxin aflatoxin B1 and the toxic adulterant melamine, the same one responsible for the global recalls of 2007.[1]  The same day, the Hong Kong consumer-reporting agency published their report.[2]

This is a reminder that even today, seven years after the recalls of 2007, very little has changed in regards to federal rules and regulations that govern pet food manufacturing and the use of feed (animal) grade ingredients. No FDA mandated testing has become required or law.  The industry remains largely self-regulated.

What are feed ingredients?

“Feed” ingredients are the ingredients that  most pet food companies use to make their food but are not allowed in food intended for human consumption, because they are not considered safe to eat by humans. According the Association for Truth in Pet Food, despite the term pet “food”, feed is not food, since “feed can include ‘material from diseased animals’ or ‘contamination by filth’ or ‘contamination by industrial chemicals’”.[3]

What are USDA Certified, Inspected, and Approved ingredients?

“USDA certified” ingredients undergo the highest quality control and food production in the USA, which ensure stricter testing for the toxins regularly found in the lower quality “feed” standard.[4]   Simply put, these are ingredients fit for human consumption that you would use in your kitchen, or enjoy at a restaurant.  The inspection and approval program is considered the most advanced and the strictest process of food production the world.[5]   All ingredients used by JustFoodForDogs are USDA certified, inspected, and approved.

Melamine, the industrial chemical responsible for the 2007 recalls[6]   and blamed for kidney failure is still not a legally required quality control test for pet food manufacturers or in feed grade ingredients.[7]  It is however, required testing by the USDA in foods intended for human consumption.5 The scientific community is certain that Melamine is toxic:

•          In 2008, The Journal of the American Veterinary Medical Association confirmed that 70 pets died of renal disease due to necrosis (dying) of the kidneys linked to melamine-tainted food during the recall.[8]

•          Also in 2008, a study published in the Journal of Veterinary Pathology analyzed kidney samples from a dead Parson Russell Terrier, a dead Burmese Mountain Dog, and a dead mixed breed dog suspected to have died from contaminated food.  They confirmed the deaths were linked to illnesses caused by melamine from commercial pet food.[9]

•          The Journal of Toxicological Sciences also published a paper in 2008 citing a conclusive link between melamine contaminated feed ingredients and the outbreak of renal toxicity during the recall.[10]

•          In 2009, The Journal of Interdisciplinary Toxicology described two examples where melamine was found in two feed (animal grade) products, and took it one step further to warn of possible human food contamination.[11]

•          In 2010, The Journal of Medical Toxicology looked at 278 pets that died during the outbreak, confirmed the connection, and found that those that were weak or debilitated (sick or aging pets) were the most vulnerable.[12]

•          A recent 2010 study in the Journal of Veterinary Medical Science analyzed the death of two young dogs in Treviso, Italy.  The study concluded these dogs died from a similar cause as those who died during the 2007 recall – melamine toxicity from pet food.[13]

Is Melamine testing required in foods fit for human consumption?

The most famous publication addressing the incident of melamine toxicity in humans is a 2009 study in the Journal of the American Society of Nephrology that essentially “discovered” melamine as a potential hazard for humans from human cases in China.[14]   In 2009, a Canadian study published in the journal of Pediatrics and Child Health expressed concerns of exposure of Canadian children to melamine in processed baby foods.[15]   Also in 2009, the Journal of Environmental Health Perspectives published a concern about melamine in processed human foods, including infant formula.[16]

In 2009, the above studies prompted the FDA to established maximum residue limits (MRL) and mandatory melamine testing in human foods, but not pet foods.[17]   In 2010, the Journal of Medical Toxicology outlined an outbreak in infants, and cited a similar disease process as the one linked to the melamine recalls in pets.  The study also asserted that the FDA has established melamine testing in foods certified for human consumption.[18]  A similar concern was published in the same year in a review written in the Journal of Emerging Health Threats.[19]

Is mandatory melamine testing expensive? Would it raise the cost of production of pet food?

According to published studies, testing for Melamine in pet food is straightforward and inexpensive.  Some larger companies claim they already perform voluntary testing, however there is no official government oversight or regulation. The two biggest manufacturers of pet food are profitable and reported over 32 billion dollars in revenue in 2012 [20], thus cost can hardly be considered an issue.  There are various methods of testing, and many of them have been developed to be quick and accurate.[21,22,23,24]

Recently, the FDA has released a video focusing on another major threat in commercial pet food:  Salmonella bacterial contamination.  They also cite other toxins may be of concern.  The video references the case of a specific commercial pet food plant that was also the subject of a March 2014 study published in the Journal of the American Veterinary Medical Association, which details how at least 53 known human illnesses were linked to commercial pet foods made at this plant in 2012.[25]  A class action lawsuit linked to this outbreak was recently settled, and plaintiffs in the suit may be compensated with rewards ranging from full market value of their pet to up to the price of two bags of pet food, depending on which ‘subclass’ they qualify for.[26]

Potentially the most concerning contaminant in pet food are mycotoxins.  Mycotoxins are derived from fungi and can be lethal at high doses, and can be immunosuppressive or have been linked to chronic diseases such as cancer at lower, long-term, sub-lethal doses.  The recent Hong Kong incident was related to a cancer causing mycotoxin metabolite of aflatoxin. Currently, there is no federally mandated, comprehensive testing required for mycotoxins in pet feeds.  As part of the fair research for this discussion, JustFoodForDogs LLC contacted top pet food manufacturers for details regarding their testing protocols, assays, and approved levels. Veterinarians from the companies responded similarly, saying that the assays and details of the testing are “proprietary” (personal communications on file, JustFoodForDogs LLC).

Is testing not required because mycotoxins have not been linked to pet food?

The risk of mycotoxin contamination in pet food and its impact on pet health has been extensively researched and documented, yet no levels have been officially mandated by the federal government.  Pet food companies are trusted to control these toxins and to keep them below sub-lethal levels but there are few legally defined processes to ensure they are meeting these expectations and virtually no government enforcement.

•          As early as 1993, concerns of toxins in feed (animal grade) ingredients were referenced.  At that time, it was reported that the FDA would continue to monitor the issue.[27]

•          In 1997, the journal of Food Additives and Contaminants reported a specific concern regarding mycotoxins in pet food, when it was established that low levels of them could be found in feed grade ingredients.[28]

•          A study published in the Journal of Food Protection in 2001 cited concerns regarding the identification of various fungi (the source of mycotoxins) in commercial pet foods imported from Argentina and warned about the “risk for animal health”.[29]

•          A 2006 study published in the Journal of Agricultural and Food Chemistry looked at mycotoxins in pet food around the world and concluded that contamination can lead to chronic effects on the health of pets.[30]

•          In 2007, the International Journal of Food Microbiology published a study that highlighted “mycotoxin contamination in pet food poses a serious health threat to pets”.  The study also listed the specific mycotoxins of concern: aflatoxins, ochratoxins, trichothecenes, zearalenone, fumonisins and fusaric acid, all of which, according to the study, have been found in feed ingredients for pets and have been linked to acute toxicity and chronic health problems.[31]

•          A 2008 study published in the Journal of Animal Physiology and Animal Nutrition found high levels of mycotoxins in the raw ingredients used for pet food in Brazil.[32]

•          A 2010 study in the journal of Mycotoxin Research tested 26 commercial dog foods for a variety of mycotoxins and found sub-lethal levels that were concerning; it was determined that long-term exposure to them could pose chronic health risks.[33]

•          A 2012 study published in the journal of Toxins found concerning levels of multiple mycotoxins in European manufactured pet food despite some regulatory oversight through the EU.[34]

Are there any other possible risks to feeding commercial pet food?

Some research suggests that carcinogens that are tightly controlled and regulated in food produced for human consumption may not be as well controlled in pet food.  In 2003, a study published in Mutation Research hypothesized that there is a connection between chemicals found in commercial pet food and cancer in animals that eat these foods.[35]  In addition, various smaller threats have been identified in stored commercial dry pet food including molds and storage mites.  It is thought these may be the source of some allergic reactions and skin lesions in dogs.[36]

So if nothing is changing, and there are few regulations, what can we pet parents do?

The only legally protected, federally inspected, enforced, and well-defined quality controlled process for food production in the USA (and the best in the world) is the USDA certification, inspection, and approval program.[4]   All food fit for human consumption is regulated by the FDA and must pass rigorous standards and most meats go through the USDA inspection process. For this reason, the only way to ensure adequate quality control is to feed only food that has been made with USDA certified ingredients fit for human consumption and scientifically balanced for their needs. In addition, there are documented benefits of whole foods in health and nutrition,[37]  and the 2010 USDA Dietary Guidelines for Americans, the cornerstone of Federal nutrition policy, recommends acquiring its nutrition from whole foods and not processed foods and supplementation.[38]

Only JustFoodForDogs daily recipes are made with absolutely no feed grade ingredients and have all been clinically shown to boost the immune system of healthy dogs that eat our food over kibble:

[5] Center for Science in the Public Interest (2005). Food Safety Around the World. Retrieved April 8, 2014, from http://safefoodinternational.org/local_global.pdf

About JustFoodForDogs: We started JustFoodForDogs with one simple, primary objective – to increase the quality and length of life for as many dogs as possible through the food they eat. All of our food is made from ingredients certified by the USDA for human consumption and we add all of the necessary nutrients to make our meals complete and balanced. Our recipes are developed by our own team which includes a veterinarian, nutritionist, pet chef and a cadre of dogs and dog lovers.

To learn more about us please visit us at justfoodfordogs.com or for daily updates visit us on facebook.